Spikes in data can be caused by environmental debris in the water column (phytoplankton, jelly fish, etc.). Regions of high biological productivity are more likely to result in lots of spikes in your data set. Such spikes can change the spectra and skew estimates of dissipation. Despiking detects anomalous, stand alone spikes in data and replaces the spikes and adjoining data points with a carefully constructed average.

The despike function in the ODAS Matlab Library performs the following steps:

Steps (1) – (3) are repeated, using the signal produced in step (3) as the input signal for the subsequent iteration of step (1) until no further spikes are identified. This process can be visualized using the ‘-debug’ option of the despike function.

where dv is the signal to be despiked, thresh is the threshold value for identifying spikes (quick_look uses a default of 8), smooth is the cut-off frequency of the first order Butterworth filter that is used to smooth the rectified input signal (quick_look uses a default of 50 Hz), Fs is the sampling rate (our instruments usually sample at 512 Hz), and N is the number of spikes removed (quick_look uses a default of N = 0.04*Fs). The spike and adjoining points are replaced by a carefully constructed average. The number of replaced adjoining points is a controllable parameter. If an insufficient number of data points are replaced, spike artifacts will remain in the data and continue to skew the dissipation estimates. If too much data is replaced, the signal variance will be reduced. Effective despiking requires scientific judgement and careful control of despiking parameters to achieve the ideal balance. Appropriately despiked data produces cleaner spectra and more accurate dissipation estimates. 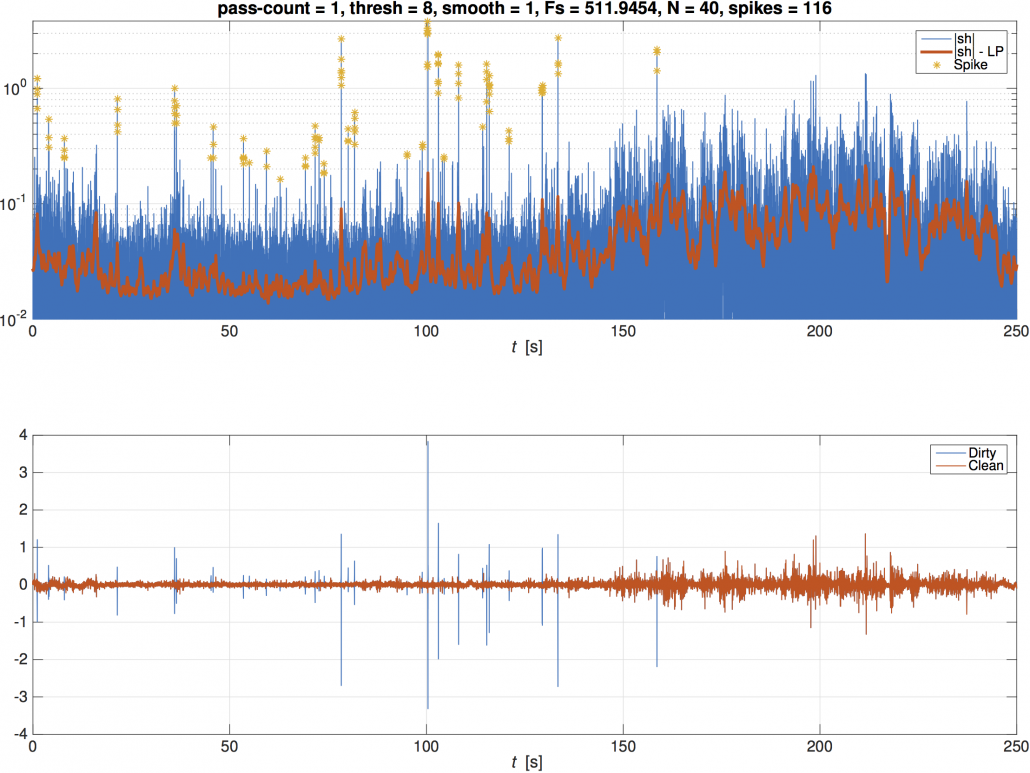 Use the ‘-debug’ option to test different thresh, smooth, and N parameters. Once you are satisfied with the despiking, the parameters can be input into quick_look to perform the despiking for you.

Rockland and Dalhousie University researchers combine to develop solutions for...
Scroll to top

Because these cookies are strictly necessary to deliver the website, refusing them will have impact how our site functions. You always can block or delete cookies by changing your browser settings and force blocking all cookies on this website. But this will always prompt you to accept/refuse cookies when revisiting our site.