The profiling velocity, W, of a VMP instrument is derived using the signal dP/dt from the integrated pressure sensor.  It is imperative to have an accurate and high-resolution sensor to derive the rate of change of pressure, because it is used to convert the shear-probe data into physical units, and to convert the time rate of change of temperature in a vertical gradient of temperature. 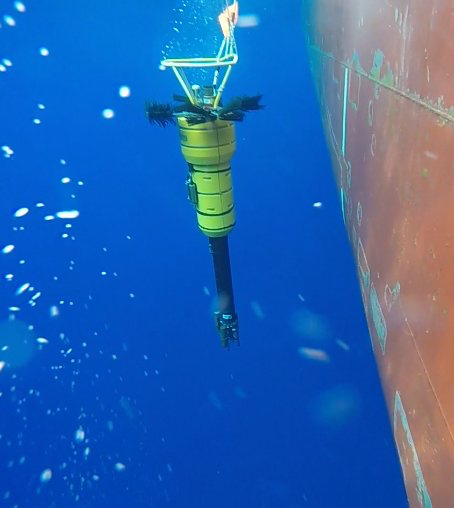 The absolute accuracy of the pressure transducer calibration is 0.1%. The repeatability of the measurements and the polynomial fit to the calibration is accurate 0.01%. However, the pressure transducer has an offset (that is not very temperature dependent) and sensitivity that is temperature dependent. The offset is easily removed by taking a reading in air and adjusting the zeroth-order polynomial coefficient accordingly. The temperature dependence of sensitivity is poorly specified by the manufacturer of the transducer and may be as large as 1% for a temperature change of 20C. This can lead to a possibly significant error in the estimate of the depth, particularly if you are “playing chicken” with the bottom, but the vertical velocity is still accurate to better than 1%.

The estimates of the rate of dissipation of kinetic energy are proportional to the inverse fourth power of the speed of profiling and, therefore, only biased by ~4% by the temperature dependence of sensitivity of the pressure transducer. In comparison, the calibrated sensitivity of the shear probes is accurate to about 5% which leads to a 10% uncertainty in the rate of dissipation. Thus, the pressure transducer provides a satisfactory estimate of the vertical speed of a profiler for the requirements of making dissipation estimates, in an ocean with vertical velocities that are small compared to the fall-rate of a profiler. The last caveat can be important in some situations.

The vertical velocity of the environment is important in highly turbulent flows, such as tidal channels, where horizontal vortices can induce considerable vertical velocity. It is also important in regions of intense internal waves, such as solitons. Consider that in a vertical updraft equal to the fall-rate of a profiler, the rate of change of pressure will be zero. For cases of strong vertical velocity, it may be better to assign a constant speed of profiling equal to the typical fall-rate of a VMP, possibly a rate that is slightly depth dependent to account for the slowing of the profiler from line drag. The hotel-file provides a means of doing so and this is described in Rockland Technical Note TN-039 (available by request).

How to Zero the Pressure Sensor
Scroll to top